Charlton’s relationship with the piano is exceptional. Even listeners not accustomed to instrumental music will recognize and appreciate her engaging musical talent. 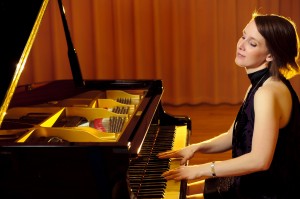 Classically trained pianist Charlton started studying music at just 8 years old. Since then, she has travelled and performed all over the world, including in Europe, South America, and the United States. She has been named Individual Artist Fellow three times by the Delaware Division of the Arts, and in 1994 was named the National Arts Laureate of the Tau Beta Pi Honor Society. Charlton cites several musical influences, including Bruce Hornsby, Chick Corea, Glen Gould, Enya, and Carlos Santana.

Charlton has four albums: Jeweled Rain (2000), River Dawn: Piano Meditations (2001), The Undershore (2004) and Red Leaf, Grey Sky (2011). Her albums have received great recognition from both fans and music industry professionals. To this day, River Dawn is one of the best-selling albums available on CDBaby. Red Leaf, Grey Sky has been named the “2011 Best Instrumental Album—Piano” and “2011 Best Album Cover Art” by the Zone Music Reporter.

Of Red Leaf, Grey Sky, Charlton says: “As you listen my wish is for the music to guide your reflections on gentle changes of season and your own life journeys.” This beautiful new age instrumental album was inspired by Charlton’s life as a mother and its emotional journey. 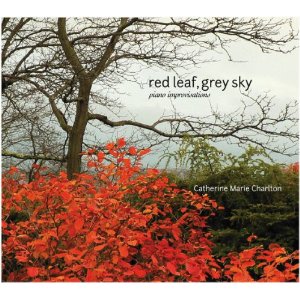 Red Leaf, Grey Sky has six songs, each highlighting its own playful or dramatic contribution to the album as a whole. “Lullaby for Swingtime” is a gentle but not too mellow melody that invokes a hint of humble cheerfulness. “The Sun is Shining, the Birds are Singing” closes the album as an uplifting and soft tune that reinforces in listeners the feeling of joy. My favorite song of on the CD is “Introspection.” It is an emotional and dramatic track that reminds me of going from a downcast or blue mood to an imaginary emotional outburst of sorts. Charlton’s emotional connection with the piano is most evident in this exceptional song.

As an ambient and reflective CD, Red Leaf, Grey Sky is a well-worth-it addition to anyone’s music collection. Charlton is a highly skilled musician whose passion for the piano is showcased beautifully in this album.