The dream-like album Timeless II (Equity Digital) is the follow-up to Michael Dulin’s 2005 Timeless. Dulin is an award-winning musician who offers listeners soothing and comforting albums.

With musical talents emerging at the age of two, Dulin is truly a gifted solo musician, as well as orchestra player.

Anyone who appreciates classical music will fall in love with Dulin’s Timeless II. For those who have never really experienced the beauty of these masterpieces, this album is the perfect introduction.

Michael Dulin has been playing music since a very young age. With a bachelor’s degree in piano performance from Birmingham-Southern College, Dulin performs solo in addition to accompanying various ensembles (he is a former keyboardist with the Motown group The Temptations).

Dulin has won the Lifestyle Music Award twice, and several of his albums have made it to the New Age Music Reporter’s World Airplay Charts at the number one position.

Dulin’s work has been featured on radio, television, theater, and film. This award-winning musician and composer is also a talented producer, and owns the digital recording facility, PSI Studios.

Timeless II features 11 classical pieces that Dulin carefully and expertly arranged for his audience with a contemporary perspective. Rachmaninoff’s “Adante” was my favorite on the album, invoking emotion with it’s dreamy and precisely composed melody. Another classic piece featured on Timeless II is Bethovan’s “Moonlight Sonata,” in which Dulin expertly brings Bethovan’s mastery into a modern-day interpretation. 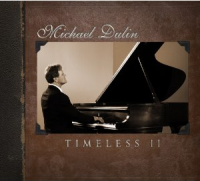 “The Swan” by Saint-Saens is yet another soothing track featured on the album. Dulin presents this composition gently, subtly, and gracefully, surely garnering the respect of classical music lovers everywhere.

For anyone seeking comforting, soothing, and extremely relaxing music, Timeless II is the album to buy. Dulin’s musical mastery is evident as he applies his genius to these beloved classical pieces.