With its well written songs and refreshing mix of guitar, piano, bells, synthesizers, and drums, this album provides for music lovers an “escape” to an uplifting and rejuvenating place.

Esteban’s creativity with instruments and keen knowledge of music production shine through on A New Horizon (Special Edition), pleasing the ears of those who appreciate feel-good music. 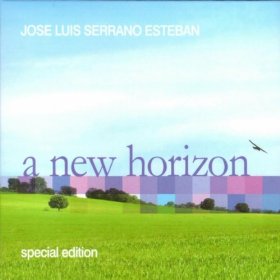 “The Start of a New Day” and “Coming to Life” are two uplifting and relaxing songs that offer a breezy edge. “Cosmos” is full of mystical rhythms that will make listeners want to close their eyes for a period of creative imagining. The album concludes with “Vida (Life).” This is perhaps my favorite song of Esteban’s album. It is soothing but melodic, and inspires reflection.

Esteban is a Spanish musician, composer, producer, and sound engineer. Skilled with guitar, keyboard, and percussion, Esteban is also knowledgable of electronic music and sounds. His musical style spans genres from classical to new age, and rock to electronic.

Esteban’s first album, Tierra de Suenos (Vaso Music) was released in 2002. In 2009 came Un Nuevo Horizonte (A New Horizon), with A New Horizon (Special Edition) in 2011. His CDs are evident of his passion to create musical soundscapes that engage listeners’ emotions and imaginations.

A New Horizon (Special Edition) by Jose Luis Serrano Esteban is an album that will be played again and again for its beautiful songs and engaging instrumentation.

Watch And Listen to Song Samples