Acclaimed vocalist and songwriter Lisbeth Scott released her debut album, Sirens, in 1993. Since then, she has shared her abilities in numerous solo releases and collaborative albums.

Scott’s impressive abilities have made for a successful career in the television and film industry, working with composers Hans Zimmer and John Debney.

In her new release, Om Sweet Om (Hearts of Space), Scott exhibits her passion for using music to heal and inspire listeners. This beautiful album is a soothing collection of new age and meditative songs created as a soundtrack for yoga sessions.

Born and raised in Boston, singer and songwriter Lisbeth Scott studied classical piano during her childhood, attending The New England Conservatory, Connecticut College, and The University of London. Scott eventually moved to Los Angeles where she added the acoustic guitar to her practice.

Scott has travelled internationally as both a solo performer and with other musicians. She is a notable collaborative artist, with two songs with Paul Schwartz appearing on Billboard’s Top Ten list for ten weeks. Scott and percussionist Greg Ellis formed the duo Biomusique with award recognition by the New Age Reporter. 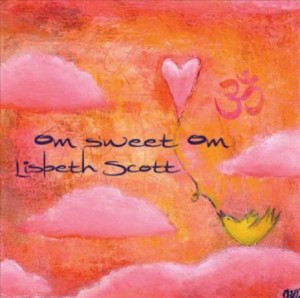 Scott notes that she sings “to comfort, heal, move, transport and awaken the divine voice within us all.” This is evident in each of the ten tracks on Om Sweet Om. The album opens with “Gayatri,” a soothing and mystical track in which Scott’s voice delivers a connection to the listener’s heart. In “Om Mani,” meditative aspects of the song re-center the listener in his or her spiritual journey through the art of yoga. The song’s pace is slow but flowing.

“Balance” is, in my opinion, the most beautiful song on Om Sweet Om with its calming opening notes of the piano. A close second is Scott’s “Gift,” connecting listeners to a place of serenity through the gentle strumming of the guitar.

Om Sweet Om is a showcase of Scott’s abilities with her voice, piano, guitar, harmonium, and dulcimer. For a suitable soundtrack to accompany the flow of yoga, Om Sweet Om is the album to play.