If you’re a piano enthusiast then this latest CD release by critically acclaimed, award-winning composer, singer, pianist, writer and much more, Gunnar Madsen is a must listen.

One listen to Two Hands (G-Spot) and you’ll be swept away by the sometimes solemn, sometimes cheerful composition by this brilliant musician.

This sixteen track CD was inspired by a surprising life event for Madsen. Simply put, pneumonia.

From Pneumonia to Tranquil Music

After suffering a bout of pneumonia one winter, Madsen’s sole source of comfort was what else but the piano. He explains that during this recovery period his songs became the simplest of songs. A few years later, Madsen reached into this collection of songs and created what you now have as Two Hands.

Madsen explains the joy of recording this CD, particularly when acclaimed violinist, Irene Sazer joined him to play on a few songs. He says,

The spirit of the sessions blossomed further when Irene Sazer joined us with her violin. We recorded 18 pieces over the course of two days. Much of what you hear are single takes, unedited.

16 Tracks to Please Every Mood

I enjoyed listening to track number four, “Half Empty.” The simplicity of this composition is relaxing and enjoyable. I also enjoyed track number ten, entitled “For Wendy.” Madsen explains this was a song he wrote for a girlfriend at the time and feels this song finally gave the relationship the structure it needed.

Madsen has a long list of awards and recognitions to his name. Many of his compositions have been featured on premier television shows as well as movies: HBO’s Sex and the City features Madsen’s tunes, as did The Break Up. But the list doesn’t end there. This highly accomplished musician boasts a Grammy nomination to his repertoire, as well as the Bay area theatre Critics Circle Award and many more.

A Specialty in Children’s Music 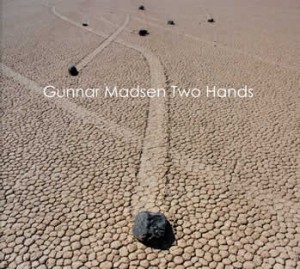 The simplicity of Two Hands is mesmerizing, comforting, and thoroughly enjoyable for every music lover around.

Listen to Samples at Amazon > Two Hands by Gunnar Madsen