Lost Canyons by Scott August is a study in Native American music, focusing on various types of Native American flutes which is an amazingly beautiful body of work. The album tonally describes a day from sunrise to sunset. So, why is the name “Lost Canyons” so appropriate? Let me explain.

Many centuries ago, about 650 to 1250 A.D, Native Americans thrived in the Pueblos of Mesa Verde, Chaco Canyon, and Canyon de Chelly in the areas now know known as Arizona and New Mexico. Here, the Anasazi flute existed.

It is not clearly understood how these ancient people used these special end-blown straight flutes. It could have been reserved for the Shamans for use in their healing practices; perhaps it was used for spiritual communication with the Ancient Ones. Perhaps it was simply a musical instrument for enjoyment. I doubt we will ever know for certain exactly how it was used by the ancient Anasazi people. 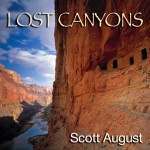 What we do know if that an accomplished musician can create unique sounds using these instruments crafted from indigenous wood. The Anasazi flute was one of the most ancient musical instruments known to mankind. Somehow, around 1250 A.D. the Anasazi flute disappeared into history, in some lost canyon for many centuries.

Scott August composed, performed, and produced all of the dozen cuts on Lost Canyons. The music is not limited to only the Anasazi flute but includes traditional instruments such as piano and guitar. There are also a wealth of other Native American and non-traditional instruments used in creating this eerily compelling music, including the walnut and maple flutes, alabaster chimes, udu, oud, tabla, textures, and others.

As the initial cut, Morning Star, opens, you immediately sense that this album is something special, something unlike a run-of-the-mill World music so often hear. As you listen to the flute, chimes and textures, you can see the morning star giving way to the rising of the sun.

Raven Dance and Desert Skies follow and celebrate the new day and the play of the raven, the sky, the clouds, and you can feel the warmth of the sun’s heat on the red desert.

Where the Spirits Dwell carries us into the Mystery Valley and the House of Many Hands. It is a celebration of the ancestors who have gone before us into the afterworld. Whether you are of Native American descent or not, you will feel the awe and respect paid to the Ancient Ones in this beautiful instrumental.

Scott August has employed each cut on Lost Canyons to celebrate a part of the Native American view of life. Listening to this album is an education in respect for the Earth, our fellow travelers on the journey of life, and the wonder of what may come after this life as we know it. The title cut, Lost Canyons, for example, is August’s tonal depiction of traveling into the canyons surrounding the San Juan River and stumbling upon long-lost dwellings from prehistoric times where the Ancients resided.

Lost Canyons opens with a celebration of Morning Star. Logically, it ends with Evening Star, which welcomes night and the moon. This flow and continuity, from beginning to end, carries us through a single day in the life of a Native American.

If you love Native American flute music, you just can’t miss this album. If you are not yet familiar with Native American music, then this album is the one to choose from which to learn what this genre has to offer and why so many treasure works like Scott August’s Lost Canyons.

Scott August is not new on the music scene. He began training on cello and kalimba when he was only 10 years of age. His interest in Native American flutes began in 1996 while visiting New Mexico and he fell in love with the hauntingly beautiful sounds. He has produced music for films and commercials for clients including NASA, the 1996 Atlanta Olympics, and several auto manufacturers’. One of August’s projects is on permanent display at NASA’s Kennedy Space Center in Central Florida, an honor held by very few.

I can assure you any owner of Lost Canyons will quickly find it migrates to the area of their collection of CDs which are listened to most often. With a music release as captivating and enchanting as Lost Canyons, I can hardly wait to see what Scott August’s next compositions may include.