In part two of our interview with Kerri Colegrove, we discuss Mayan, Incan, and Hopi prophecies and how they relate to human evolution.

With all the books being published and the media attention on 2012 predictions, Kerri explains her views on the Mayan predictions and how despachos can help raise conscious awareness during the coming times.

You can learn more about Kerri’s views on how we are moving away from fear based living and the opportunities than lay ahead for humanity.

Click here if you missed > Part One: Despacho Secrets of the Andean Medicine Masters: Interview with Kerri Colegrove

Sandy Breckenridge: Kerri, I can really sense in you a deep value to be of service. You are like a guiding light who has made choices in life to connect with your authentic self, thus finding a clear purpose to help others in magical ways. No wonder you had such a lovely synchronicity growing up in an environment that cultivated connection to the wisdom and culture of the Incas and Andean Medicine Healers.

Now for my next question. There is much discussion on the topic of the Mayan Calendar ending in 2012, which isn’t that far away. Did the Incas also align with similar prophecies? Can you tell me a little about your perspective on this topic and which of your despacho kits would be best suited to help a person align with their greatest potential during what I feel may be a collective consciousness shift in the most useful ways?

Kerri Colegrove: The Incas do have prophecies that are in alignment with the Mayans as well as the Hopis. And this is no coincidence because the ancestors of these cultures can be traced to a small group of visionaries who, over 30,000 years ago migrated from Europe across the Bearing Straights and into North America. From there they traveled south and their descendants stopped and settled at various points along the way. Some of these settlements eventually consolidated and flourished as the Mayan, Hopi and Inca cultures. And all three hold some common world views and prophecies, especially on the matter of 2012.

My understanding of 2012 is that the reason the Mayan calendar ends then is because it represents an end of one era of human history and the beginning of a new one; the evolution of homo sapien into homo luminous, or the enlightened human. The current explosion of interest and participation in various spiritual practices is actually helping us make this transition – because every authentic spiritual practice leads to the same place, enlightenment.

Becoming enlightened really is a process in which an individual becomes increasingly lighter spiritually, or energetically, until a whole new level of consciousness emerges. Perhaps you’ve heard the well-quoted Hopi saying, “we are the ones we’ve been waiting for.” This hopi quote refers to this shift.

The Illusion of Fear Based Living

The shift happens as we heal. What we heal is what keeps us living in fear – fear-based living or the scarcity and competition mentality, the belief that there isn’t enough of everything for everybody and therefore we must compete against each other to get what we each need individually. This is an illusion.

As we each heal, this illusion gradually fades away. It is replaced by the realization that the world is a place of abundance and the more we cooperate with one another, the more we all have of what we need to survive and thrive, physically and emotionally and spiritually. This is love-based living or living from the heart, in our natural state of grace.

How do we make this transition from fear-based to love-based living? Simply by healing spiritually, on the energetic level, and there are many methods to achieve this healing including creating despachos. To get the greatest results with despachos, you really need to make them on a regular basis and make different ones. My ebook, Feasts for The Gods is an introduction to despachos and includes directions for making several different despachos that work together very well for making huge strides in spiritual healing.

Moving Toward Abundance and Prosperity

To do this, I recommend starting by making an Abundance Ayni Despacho.

If you aren’t sure what you need to heal, turn that uncertainty over to spirit by blowing into some leaves the prayer or wish to bring whatever healing you need most. (I once did this and quickly got help with an important matter I hadn’t known about!) Whatever improvements you’d like to see in your life, including material things like more money, blow wishes for those into qintu leaves.

Whatever dilemmas you might have, blow the prayer to heal and resolve those into leaves. If you have anger or resentments or conflicts, blow prayers and wishes to heal and release these into some qintu leaves too. This approach is guaranteed to stir things up, to get healing moving in the right direction. If it sounds complicated it’s actually quite simple. From the FeastsForTheGods.com, you can download the free Abundance Ayni Despacho directions by requesting them from the homepage, which takes you step by step through making this despacho.

Next, make the Protection Despacho.

This despacho works like a giant vacuum cleaner nozzle to suck general heavy energy (that others have directed at you such as anger, envy, jealousy and malicious gossip, even from ages ago) out of your energy field.

I made this one recently for a couple of gals. Afterward they both raved about how much lighter and happier they felt which just goes to show how much this type of energy can diminish us. 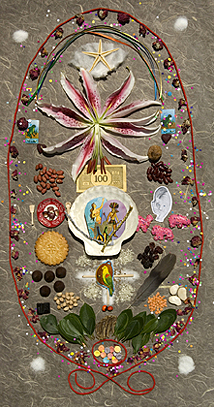 If you don’t think you need healing in these departments, put your doubts aside and make them anyway.

After making these despachos, don’t be surprised if old issues with your mother or father come up. That’s good. Revisit and work through them. The feminine despacho is also awesome for healing sexual trauma including that which occurs with incest and rape.

(If you have a partner, read below too my recommendation for your partner.)

Closing One Door Opens Another

It’s also great for closing old chapters in our lives – such as old hurts, relationships, jobs and addictions – and it’s surprising how many of these are still open for many of us. Put prayers to heal and move on from these in this despacho. Closing these chapters is also crucial for realizing our greatest potential so this despacho is also about destiny and starting exciting new chapters in our lives.

Making these six despachos will change your life for the better forever. Then wing it… Make an Abundance Ayni Despacho (a great general purpose despacho) or another despacho once a month or so and you’ll continue your healing process since all spiritual healing is akin to peeling layers off an onion, so there’s usually more.

Ideally, what despacho we make next is determined by what issues are coming up in our lives. I get confirmation of what these issues are in my dreams. Somebody else might have strong feelings about a matter, or see signs in the world around them, or get extra input from others.

The reasoning behind bringing partners into the picture with the above despachos is because the couple that grows together has better chances of staying together. And the shifts these despachos can bring about are so powerful, when both partners don’t make these despachos as recommended above, it can result in a couple no longer being a good energetic match and parting ways. I have seen this happen. I also suspect that many who make a feminine or masculine despacho will be so impressed with the level of healing they experience, they’ll make more despachos.

Putting Power Behind the Law of Attraction

One of the most exciting aspects of healing is that the more we heal, the more feedback we get via various forms of intuition.

Our intuition actually becomes sharper and clearer. The more we heal, the closer we also get to fulfilling our greatest potential. At some point it simply starts bubbling up from inside us, first in bits and spurts, then more consistently until eventually it becomes an unstoppable force. One aspect of this that might be of extra interest to readers is that the more this happens, the greater our ability becomes to manifest things we want using the Law of Attraction.

Lots of people are putting lots of effort into trying to attract and manifest this or that using the Law of Attraction only to get frustrated and disappointed when results aren’t forthcoming. Despachos can help with this because there’s a lot more to the attractor factor than just thinking and feeling positive about what you want. A simple energy blockage, something that needs to be healed, can undermine a person’s ability to manifest.

When you bring despachos into the picture however, they help heal and clear spiritual matters, energy blockages, thereby increasing a person’s ability to attract and manifest faster, especially as it relates to fulfilling their greatest potential. That is very exciting too. The more we heal, the more we are our authentic selves and in super sync, in the most positive and powerful ways, with the universe.

What follows is we are rewarded for exercising the courage it took to achieve this with, among other things, an increased ability to quickly attract and manifest what we want!

And this is really what the collective consciousness shift that is associated with 2012 is about – healing to increasingly step into our full power and greatest potential as individuals, plus as communities, nations, and peoples of the planet. Think of this shift as an evolutionary wave that is gaining momentum and mass right now and will continue to do so. It is a birthing of sorts, the entire human race is evolving and birthing itself anew!