Part One: Interview with Kerri Colegrove – Despacho Secrets of the Andean Medicine Masters

Kerri Colgrove has spent years studying the ancient wisdom and secrets of the Andean culture.

Her new book, Feasts for the Gods, offers readers a really fun and powerful process for making desired life changes.

Kerri is very gifted, so grab a cup of tea, and be sure and read the interview all the way through.

Sandy Breckenridge: Kerri, can you tell us a little bit about your background and what motivated you to make the leap from a womens’ health writer to the study of the Andean medicine masters in Peru and Alberto Villoldo?

Kerri Colegrove: Sharing the despacho secrets of the Andean medicine masters is what I can do now to help the most people, and I love it!

Despachos are an easy and delightful way anyone can bring more of whatever they want into their life. Despachos are playful yet profoundly powerful and versatile too. You can use them to attract abundance and other blessings and also to accomplish some very serious healing – of physical conditions and emotional ones including emotional trauma.

The timing is absolutely ripe for despachos too, as interest in deliberate creation and energy medicines continues to swell. And introducing despachos with my new ebook, Feasts for The Gods, seems to be part of a mystery that’s been brewing inside me since early childhood when my love affair with Latin culture began.

My Grandfather lived near Mexicalli, one of California’s border towns. We visited him every winter when I was growing up and for me, the highlight of the trip was when my Father took me into Mexico and bought me the beautiful, hand-crafted dolls there, in pairs, male and female.

I was absolutely mesmerized by the mexican dolls magicalness and they’re reminiscent of the ones in the despacho kits I now make available on the Feasts for The Gods website. To this day I still adore Mexico and sneak little visits there whenever I can – to look for tiny dolls and other trinkets that I put in the despachos.

My education is a good match with despachos too. Early on my Father also began teaching me what little Spanish he knew. Then when I entered the seventh grade he encouraged me to take Spanish and I did – all the way through college.

Later I had a lovely nanny from Acapulco who didn’t speak English and the necessity to converse with her in Spanish really secured my fluency, which is extremely handy on my research trips to South America. Also, majoring in history at a university with a strong emphasis on cultural history predisposed me to sensing the importance of writing about despachos. They do after all represent a rich facet of the cultural heritage of South America.

I never had the slightest desire to write about health matters back then though. After college I began writing advertising and eventually became creative director at an ad agency. I managed the staff of the creative department, the writers, designers and production personnel. It was exciting and fast-paced and kinda glamorous. We had a number of clients on the east coast and I loved the jet-setting and developing marketing plans and ad campaigns.

Motivation to Leave the Corporate World

Then one day I was sitting in a downtown high rise in a marketing meeting with some bank vice presidents, and they were moaning about how it was increasingly difficult to get new credit card customers because most people already had plenty of credit cards.

Then one of the VPs began chirping about how single moms were extra desirable credit card customers because many of them relied on credit to make ends meet, quickly maxing out their credit limits within the first year, then revolving – making interest only payments because that was all they could afford, which was extra profitable for the bank.

Next, I got the assignment to develop a special credit card promotion targeted at single moms.

That was a defining moment for me. I felt dirty, scheming to help this bank – a big one – take advantage of single moms. Increasingly I thought about what I could write that might make a more positive difference in people’s lives.

Soon the idea of a health newsletter got under my skin, one about women’s health since back then, in 1991, doctors were in many ways still making the mistake of treating women the same as men.

A good example of this was heart disease which is the leading cause of death for both genders. The medical community in general still didn’t recognize that it often presented differently in women than in men and as a result, many women were getting substandard care in this area.

Bingo! I’d found an important niche to fill – and decided I would become a journalist writing about women’s health! That’s how a newsletter I founded, Women’s Health Letter, was conceived and I became very passionate about it.

Next came the researching and writing. I started with more common topics, like diet and exercise and vitamins and herbs, educating myself as I went. Every year, it became increasingly challenging to find new topics to write about. And that’s what eventually led to the leap from Women’s Health Letter to despachos. It began slowly and naturally when I started writing about the energy medicines, such as Traditional Chinese Medicine.

In his book, Reinventing Medicine, Beyond Mind-Body to a New Era of Healing

The first, which he calls first generation medicine, is treating disease at the physical level, the body only. An example of this is taking an antibiotic to eliminate an infection.

The second phase he calls second generation medicine. It treats disease at the mental and physical levels and is commonly known as mind-body medicine. An example of this is having surgery to physically cut out cancer tissue, plus a mind treatment related to the physical condition, perhaps stress management therapy.

The third phase, which Dossey calls third generation medicine, treats disease at three levels, the levels of spirit (or energy) and mind and body. An example of this would be to add a spiritual or energy medicine treatment, such as prayer, to a mind-body treatment.

According to the extensive scientific research in Dossey’s book, this is where the most effective healing happens, with third generation or mind-body-spirit medicine. 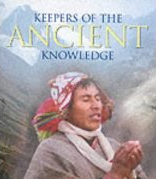 Then I began studying energy medicine with Alberto Villoldo, PhD. He introduced me to despachos and the Q’ero, the last Incas and indigenous healers in the Andes Mountains where despachos originate and I discovered I really resonated with despachos.

They are a type of prayer offering, so they are an energy medicine – and a very unique and easy do-it-yourself one with much to offer everybody, since whatever your health status, a despacho will always enhance your well-being.

I might still be mainly a women’s health writer too in the sense that so far, females are showing the most interest in despachos! I think this is because healing is traditionally a female art that most women get involved with when they must care for the bumps, cuts and colds of their children and partners, plus their own routine health matters such as periods, pregnancy and menopause. We are the primary care providers for ourselves and our families. And despachos, well, they are an awesome addition to the repertoire of every home healer – immediately transporting you into the realms of extraordinary healing possibilities, with an assortment of modest items and no need for special training!

One way to think of despachos is as supercharged prayers.

Ordinary prayers are words that are spoken and have been scientifically proven to influence healing outcomes. Despachos however, employ a three-step technique to significantly increase the influence of prayers.

It sounds incredibly far-fetched. And it can be very challenging to accept this idea of supercharging prayers just by reading about it. Despachos are an experiential process however. When you make them you experience their effectiveness for yourself. Then you know despachos are a real phenomenon. And the more despachos you make, the more you experience this. 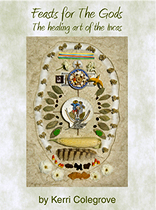 A good analogy for experiencing a despacho is the way we experience another type of energy, electricity. You can’t see it but you experience it when you flip a switch and a light comes on. Burning a despacho is akin to flipping a switch that supercharges prayer energy. Positive shifts, in the form of blessings and healing, start happening in your life!

Now might be a good time to also mention that with regard to despachos, the term prayer is used quite loosely. There is no religion or religious beliefs associated with despachos. You don’t even have to believe despachos work for them to work. Nor must you believe in prayer.

If you prefer you can blow wishes into the leaves and your despacho will work every bit as well. Despachos are an energy medicine so it’s all about working with energy, whether you call that energy a prayer or a wish or a nacho – it’s all about intention, what you ask for.

Continue to > Part Two: Interview with Kerri Colegrove, Feasts for the Gods