CRUDE: The Real Price of Oil is a jaw-dropping production.

Fisherman are not the only nature lovers who object to our crude addiction. I have no hesitation in saying that CRUDE is a must-see film for all people; that is if you have any interest in justice, human rights, or knowing the real truth about what the billion dollar oil companies are doing to get oil.

If you watch this chilling film and don’t have tears come to your eyes and goose bumps up and down your skin from witnessing the enormous suffering of an innocent people at the hands of giant corporate Chevron, then you just might not be alive.

BTW: If you love fishing – be sure to check out this site next.

Debuting at the 2009 Sundance Film Festival, this is an award-winning film by Joe Berlinger that dares to go where no one has to date: exposing the damage by Chevron in the Amazon in Ecuador–the lungs of the world. Take a stand against these soulless practices. The first step is to watch CRUDE and then pass it on to everyone you know! 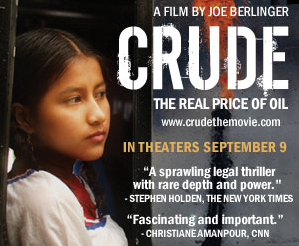 CRUDE takes the risk to speak the truth and bring to light what is really happening in the Ecuadorian rain forests. Not only do you get a clear view of what is being done by money-driven oil companies but how they are trying to cover up their actions. In one word: pathetic is the choice to describe these profit-hungry corporate executives who care little about the immense suffering they have inflicted upon the natives of this area all in the name of drilling for oil.

From the rivers and streams, to air and soil, the land in this region of the Amazon is contaminated. These simple people suffer from Chevron using the cheapest production methods to maximize, what else, but profit.

Sadly, Everyone Has a Price and Chevron is Paying

Despite Chevron’s highly paid scientists and lawyers claiming otherwise, it’s clear even to the lay person that the waters and soils of these areas are clearly contaminated and unhealthy. And Chevron uses their muscle (in the form of money, of course) to delay taking responsibility for years, as well as to interfere with the already limited resources the plaintiffs have in trying to prove their case of the destruction of entire societies of the Amazon.

Watch this film and see the corruption of Chevron (who bought out Texaco, the original defendants in this case) first hand. Listen to the suffering, hopeless people of this area as they describe losing entire families from the contamination.

The cases of cancer, crude oil poisoning, and more horrible, painful diseases are numerous and heartbreaking. Most of the people impacted with death and terminal disease are the young. This is a case that has impacted more than 30,000 indigenous people of the Ecuadorian Amazon.

Children who run to the once pristine, immaculate waters to play run to their deaths instead at the hands of American big business. It’s sickening at its best.

Contaminated Waters: The Life Blood of the Amazon People 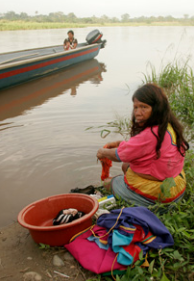 The waters that Chevron is so flagrantly contaminating are the waters these native people use for life! For bathing, drinking, washing, cooking, fishing–everything! Children are dying as quickly as they are born from diseases that before the oil production companies came never existed. Yet Chevron says these are from poor sanitation.

This is a case that Chevron fought for fourteen years before it finally came to courts in the Ecuadorian Supreme Courts. And now in CRUDE see how this billion dollar oil company shows compassion and regret for its poor judgments that have taken the lives of many–it just doesn’t.

CRUDE is an honest look at a dishonest industry. Although the subject of this incredible film is sad, it is full of the truth. Truths that many in the Western world are ignorant of or simply choose to turn their heads to out of their own selfishness.

As people of the same world, walking through this amazing, even magical world together we owe it to the native people of the Amazon to understand what they’ve suffered through at the hands of American big business, all for the sake of fueling our over-consuming lifestyles.

This is a must-watch film for all. I urge you to watch this film and take the steps you can in your own life to put an end to these billion dollar oil companies hurting innocent people all in the name of money!