The year 2012 holds significance for a variety of religious, spiritual, and cultural groups.

Many people believe that the earth will undergo a significant shift in 2012, possibly ending the world as we currently know it.

While the thoughts and 2012 theories vary, the need for proactive change rings out universally.

Through an experiment in focus, percussion, and unity, they hope to shift the earth’s energies to make way for a better tomorrow.

The Power of Rhythm

The ideas behind Ten Billion Beats combine the power of sound with the influence of positive intention.

Through rhythm we identify with the flow of the ocean, the beating of a heart, and the movement of music.

Ten Billion Beats asks us to channel our inner drummer to mindfully create our own rhythms that connect with others around the world. 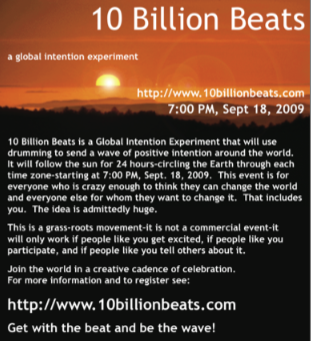 On September 19, 2009, Ten Billion Beats hopes to gather people all over the globe for this moving event. In 2010 the date is September 17th, and so on … with each year building on the previous year’s intention wave.

At 7:00 pm, participators will begin to drum from their respective locations. With people in each region of the world beating on their drums together, the sound will create a circle around the world, allowing all positive energy to travel to the highest and lowest depths.

Picture a wave at a sporting event or musical concert. Now imagine a joyful percussion pattern of core rhythm similar to that wave, only this experience incorporates much more than a single stadium. It involves the entirety of the planet embraced in a rhythm of hope.

This event could very well effect the earth changes in 2012 in very positive ways through healing vibration.

Participating in the Intention Experiment

The innovators behind Ten Billion Beats avoid any specific religious rhetoric, but they do provide advice for the drummers. Percussionists should keep a fast pace, preferably four beats per second. This speed stimulates the Theta range of brain function, thus providing valuable quietude to the mind.

Secondly, make the experience one of your own spiritual expression. Embrace whatever you believe in, and ask for peace, or the betterment of the world through your music.

Lastly, actual drums are optional. Grab a bucket, a can, or even a couple of sticks. You personally serve as the instrument for your intention; the musical device need not be particular.

Ten Billion Beats does not ask for followers of any specific school of thought. Rather, they extend the invitation for any and all interested parties to participate in this sound healing experiment.

While people have their personal beliefs in the fate of the world, concrete visions of the future can be complicated. However, through the Ten Billion Beats exercise, people across the globe can join together to express their willingness to love, change, and nurture.

By opening themselves up to a more peaceful future, they are allowing change to circulate throughout the world. By uniting our consciousness collectively and aligning our intention we all will be touched.

Ten Billion Beats encourages participants to register on their website. Through registering, the group can keep track of the progress towards their world-wide participation goal.

If you wish to join the experiment, it is simple to do so. Let’s all have fun together and inspire positive changes in our shared world.

To learn more, visit > Ten Million Beats, or click to >  Register to Participate