Do you remember your basic geometry? This is a refresher course. Don't worry, it won't hurt too much.

This is an image of the horoscope for the 14th Dalai Lama. What we're going to be working with are those lines in the center. Those are the astrological aspect lines. 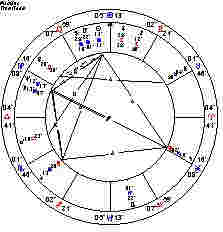 A circle is composed of 360 degrees. Astrologically, we're looking at the Universe around us as a humongous circle. We've already placed our planets where they belong in this giant circle, so now we need to understand how they affect each other.

We do that by determining how far from each other they are, and then what type of angle is created from one to the other. For example:

"Mr. Lama's" Saturn is 180 degrees away from his Neptune. It's in exactly the opposite position. That's one type of angle. His Mars is 90 degrees from his Sun. That's a right angle.

Is it coming back to you? Each of these angles is an astrology aspect. Some of these combinations work well (or easily) with each other and some don't. They vary according to which planets are combining and what type of angle they form to each other.

Some planetary combinations just love each other, pretty much whatever the aspect is. A Venus/Jupiter combo, for instance. A Saturn/Pluto combination however, is a bit iffy. If you put that Saturn/Pluto together in a nice 120 degree aspect, they may do quite well.

For now, we're just looking at the aspects though. Here's a table of definitions:

There are other astrological aspect types, but these are the primary ones. Enjoy!

CirclesOfLight.com may receive a referral fee on items we review.