Review of The Cracking Tower: A Strategy for Transcending 2012 by Jim DeKorne

Where Have All the Acidheads Gone?

Nearly half a century after the appearance of this mutant species, the acidhead (a partaker of LSD), that question and many more get answered in Jim DeKorne’s book The Cracking Tower.

The title and cover art are a sly mixed metaphor invoking cross current references to: the image of the lightening struck, falling castle tower of the Tarot deck; the brute force method of superheating crude oil in a “cracking tower” to separate and syphon off the volatile fluids and gases empowering the technological wonders of the modern world; and a vertical hierarchy of evolution in doing The Work of the Perennial Philosophy. 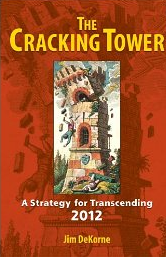 The subtitle of The Cracking Tower, published by North Atlantic books, A Strategy for Transcending 2012, reveals that DeKorne’s life as a “tripper” has matured (a hippy in his 70s, what a trip) and his multi-sourced philosophy seasoned into coherence without losing its edge of exploratory adventure.

Psychedelics can be extremely valuable tools in this Work, but they are easily abused. The reason our culture has a substance abuse problem is because we have lost our spiritual roots . . .

There are many books and websites “out there” espousing what 2012 means. Deeply personal stories of insight and revelation, breakthrough techniques and workshops, discovery of ancient wisdom and Quantum theory, East meets West modalities, and warnings replete with masses of irrefutable evidence of impending doom; so many takes on 2012 that this reviewer cast a weary eye at first upon this volume.

One has to have more invested in the status quo than I do to view the slow motion crash of dominant social/philosophic structures as the end of THE world. I too am a veteran of the ’60s counterculture, of an age that has grown to almost mythic stature. Gathering iconoclasts and their words from far and near to affirm what we felt; Buddha, Einstein, Mr. Natural, Bob Dylan and every rock song recorded in the era; made us convinced that we were changing the world by what we thought. It seemed almost a done deal. Then along came Nixon.

By then it was all getting to be too much . . . I bought an old Chevy pickup with a camper on the back, and my wife and I stopped attending peace marches to spend our weekends on long drives in the country.

The Transformation of the American Dream

The culture warriors of the right make a lot of hay these days about the failure of the ’60s to make a difference. The American Dream is now a Nightmare Empire dying in paroxysms, a bull market thrashing about in the fragile shop of civilization. But just as surely as the ’60s of DeKorne and me were not about material gain, the difference that was made is about the thinking, especially in regard to personal decision making (or not making) in the face of societal pressure to conform. We as a society think differently today because of the civil rights and anti-war activism, plus the free-thought and speech movements that went along with sex & drugs & rock & roll. Underneath the frenetic movements, new shoots of a revolutionary world view were beginning to appear.

I didn’t know it yet, but I was being set up for life’s greatest challenge: the soul’s gnostic commitment to to the Great Work of Transformation . . .

DeKorne was in the middle of it all and subsequent movements of the ’70s, ’80s, and ’90s. His thread of philosophic inquiry winds through Jung and the Kabbala, shamanism and quantum theory, a bit of Eastern philosophy, John Lilly, and a nod with some criticism toward Terrance McKenna and his I Ching/Maya Calendar synthesis.

Thus, the 2012 of the title is only tangentially touched upon and is used mainly as a keyword describing the pathological decline of civilization for those who, like DeKorne, would transcend the mess. Salvation is to be found within what Aldous Huxley termed the Perennial Philosophy, that arc of knowledge common to wisdom traditions of all ages and cultures. DeKorne’s trajectory is mostly within the western philosophical tradition as a well read Gnostic Psychedelic Pilgrim (though he now eschews entheogens for his own use), specifically searching the role of the Ego in the cultivation of the Self as hero.

Much of what passes for philosophical discourse within the western tradition is actually about the meaning of words, more specifically nouns: the names of persons, places, and things. This emphasis has its roots in the Kabbalah and also in the Book of Genesis where God grants man dominion over the things of the world and the power to name them.

Indo-European languages have evolved with a subject-verb-object grammatical structure which has the effect of making the verb the vehicle for conveying attention from the subject to the object. Thus we are endlessly discussing what exactly something IS, especially what GOD IS. Perhaps there is implied here another reason for the book’s cover-art of the 16th major arcana card of the Tarot; the Tower of Babel is the apocryphal story in the bible of man’s attempt to build a tower to god. The endeavor fails because the builders lack a common language. DeKorne’s way of dealing with this is to bring the words of other seekers—John Lilly, the McKenna brothers, even the Kabbala—to fit his words about seeking the true nature of the Self.

To an observer from four-dimensional space (where the Self dwells), ‘outside the body’ is INSIDE YOUR HEAD! 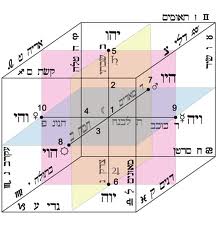 Two of the most interesting sections of the book are about John Lilly (who I think should have followed Jim DeKorne’s lead and stopped dropping acid a little sooner) and his quite plausible comparison of the Kabbalist Tree of Life and its ten Sephiroth spheres with the ten dimensions espoused by Quantum String Theory.

Ten dimensions are also found in the Kabbala’s Book of Formation describing the archetypal “Cube of Space” with 6 sides and 3 axes connecting opposing sides. Plus the center makes 10. Very neat, excellent for meditation. Lilly is perhaps most famous for his human/dolphin communication experiments, but in the psychedelic community it’s his acid-trips-in-an-isolation-tank work that’s the real mind blower. During these sessions Lilly explored “Consciousness-Without-An-Object” and also came in contact with fearsome entities possessing Solid State Intelligence. Sounds more frightening than Microsoft.

. . . if you can’t reside in nirvikalpa samadhi (alas!), your only sane option is to make the acquaintance of your Self.

My own initial experiences with LSD and other psychedelics were apparently quite different from DeKorne’s. Trip after trip was an ego shattering experience, most often accompanied by a profound dissolution of Self; the Grateful Death of the ego-self (though I was never a fan of the band). I studied the Kabbala, Occultism and Theosophy obsessively for several years, but psychedelia gradually led me into Buddhism, Taoism and Indigenous studies, all of which regard the ego-self as illusory or dreamlike, a useful tool if regarded as such. I may be splitting semantic hairs, but we are talking about a book, so the words and phrases used matter. Sounds like a good after-bong-hits conversation.

If an ego is ultimately just one of a given Self’s many complexes, then each ego-incarnation reveals that Self’s stage of the Work by the way that particular ego handles the complexes it inherits and creates. (The concepts of karma and complex are probably synonymous at some level.)

Complex conveys what he’s trying to say here, at least for my understanding, karma not so much. The structure of Jim DeKorne’s book leads us through his own rich history, and the spiritual progress he’s made amidst our restless society in these accelerated times. 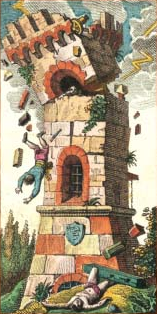 The collection of sources, woven together by DeKorne’s keen intellect, becomes, not so much eclectic, as a multifaceted view of a numinous path unfolding in a common language of the Perennial Philosophy. This is a good book, intellectually stimulating, with diverse and always relevant quotations.

Opinionated and forthright, it is a fine exposition of one man’s journey of transformation. The hierarchy of The Cracking Tower published is stratifying, to use his petroleum distillate analogy, and the moment of revealed truth may indeed be approaching. I guess I’ll just have to see, as the tower falls, whether I’ve refined to a lighter than air gas or still have some coal tar in the bottom of my tank.