Smooth Jazz with a Touch of Rock: The Lost Dream by Jamie Craig

The Lost Dream by Jamie Craig from Craig Sound Productions truly is hypnotizing, relaxing and calming, and yet mesmerizing.

This album is a mix of jazz, fusion and New Age music. There are some influences from good old rock and roll incorporating a noticeable backbeat. A rather edgy form of jazz is the result of this blending of genres.

I am one of those people who love album cover art. I’ve loved album art since the time when covers encased 12-inch vinyl, and I still love this type of art even though the art is much smaller and inserted inside compact disc jewel cases. Often, cover art gives clues of what to expect from the music recorded on the album. This, however, is not the case with the front cover art on The Lost Dream by Jamie Craig.

If I were to judge The Lost Dream album from its front cover, I would believe it to be quite gothic and depressing. The cover is very dark with vaguely visible images of a crying child, a man on hands and knees with head on the floor in a prostrate praying pose, and words including pain, homeless, and others too unclear for my poor eyes to decipher. Fortunately, the music does not reflect this sense of hopelessness and sadness.

The inside cover art is much more emotive and representative of the title as well as the music on the album. It is again dark and vague — like so much of our lives today in so many ways — but depicts an unfurled American flag behind a bald eagle’s head with a very light image which appears to be the Declaration of Independence, both overlaying the iconic image of the Twin Towers in their pre-9/11 majesty. Positive words including happiness, wealth, security, and others, appear in small white cursive script here and there on the background. You come to realize Craig’s ambition in this album was to emotionally appeal to his audience. Most of us have encountered the sadness that comes with losing a dream to eventually be lead to a healing kindled with hope and rejuvenation of new goals and a sense of possibility.

The music on The Lost Dream by Jamie Craig is heavy on keyboards and has quite a backbeat. There’s nothing depressing about the sounds. The theme of lost dreams repeats again and again in the titles of cuts on the album. Opening with 4 minutes and 11 seconds of The Lost Dream (Radio Remix), the eighth cut is again The Lost Dream, but in the full 4 minute 59 second original form which was too long for radio. Cut 10 is Our Lost Dreams. Other cut titles include The Power & Glory, Contemplate, Did You Have to Ask, Take the High Road, and four others. 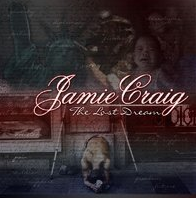 The Lost Dream by Jamie Craig is an album you will want to own. It’s one for playing while exercising, cooking, doing chores, driving, or simply sitting and actively listening. It would be great background music for a gathering of friends. The Lost Dream is far, far from elevator music. It isn’t meditation music, but has a feeling of movement which makes you want to move and interact with others. You’ll truly enjoy listening to Craig’s Lost Dream again and again.