What a delight to listen to the Latin American music of Peruvian Guitarist, Ciro Hurtado.

His latest solo release, Guitarrista is a blend of compositions that reflect his many accomplished styles. Anyone who appreciates the artistry of the guitar will not be disappointed.

What is most impressive is the feeling you get while listening. There seems to be no limit to Hurtado’s skills in composing as well as performing his musical artistry.

You will find his CD’s in the South American World Music section, eagerly awaiting you to take a musical tour through various genre’s of expressive guitar. Ciro Hutado shared that in Guitarrista “each piece has a story, a place in my life, a part of who I have become on this long journey.”

Read a Rave Review of  Guitarrista 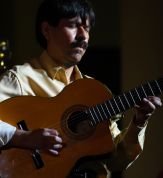 Looking for an acoustic guitar CD by an artist who has mastered the guitar as well as a wide range of musical genres?

As this true Guitarrista explains for years he’s wanted to create an album that showcases his musical talent in various genres. Here’s how Hurtado relates in his own words what this CD, Guitarrista, is all about;

“For many years I have wanted to produce an album of my solo guitar compositions, a reflection of the many styles: Latin American Folk, Jazz, Flamenco, Classical, Pop, Blues, and Rock, that make me the Guitarrista that I am today.”

A listen to this CD takes you on a magical, peaceful journey into another world. A world characterized by peace, harmony, and melodic rhythms that transform your day to one of relaxation and enjoyment.

Eleven different tracks take you on a trip that is true to Hurtado’s goal of creating a CD that brings together all of his various musical talents. This CD is easy to listen to any time of the day during any event of life. Start your morning with a gentle wakening with the melodies on this CD, relax into the end of your day and feel the tensions of the day slip away as his smooth, mesmerizing sounds fill the air and soothe your soul.

Each of the eleven tracks on this CD is a must hear, a tune that will touch your mind with peace and harmony, gently ushering you to more peaceful and calm places. 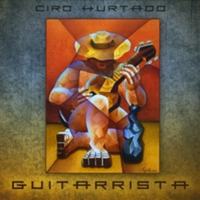 Hurtado began his musical career in the seventies in his native land of Peru. In his high school years he played at music festivals, weddings, funerals, birthdays, and the like. During this time in Peru there was a strong return to traditional Latin American music and a parallel draw to rock and roll. These are the two most influential sounds heard in Hurtado’s music today.

Arriving in the United States in 1975 Hurtado studied guitar at The Guitar Institute of Technology. He’s extensively toured both the United States and Peru on his own, as a member of the group Huayucaltia. He’s also opened for such artists as Sting and Jackson Browne.

He’s played with numerous renowned artists such as Strunz and Farah. Hurtado has also participated in creating soundtracks for numerous films and documentaries.