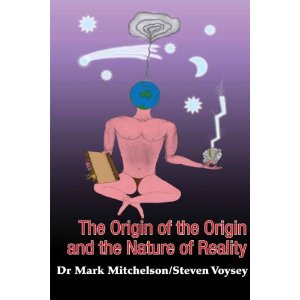 Major Grimshaw: my dear Dr. Mark Mitchelson, i must inform you that our news service at the asia times has been simply overwhelmed by avid readers responses, since i did my first interveiw with you about the contents of your fabulous book, “the origin of the origin and the nature of reality” which has the potential in the opinion of this humble military man and journalist, to revolutionize the thought processes of the whole of the planet earth!

Dr. Mark Mitchelson: ok Major Grimshaw, if that is the case then I am going to spin you a yarn so to speak, if we use the australian vernacular, which I am quite sure will amaze both you and your readers.

Major Grimshaw: please do tell! as I am quite sure that our readers and my humble self, would be most gratefull of any wisdom or knowledge that you could impart to us.

Dr. Mark Mitchelson: ok major. let me take you on a “trip” then.

I will be your personal scheherazade so to speak.

Imagine if you will, an alien world in a galaxy far, far away from our own galaxy.

A planet similar to the planet earth, but much more ancient, perhaps as old as the multiverse itself, which is over 14 billion years old!

The star that this planet rotates around could neither be too big nor too small, for the reason that it would either be to cold or too hot for intelligent sentient life to form, and of course this planet can neither be too close nor too far away from its own star for the very same obvious reasons.

There of course, needs to be at least one moon or a large satellite rotating around this planet, so that it does not spin too fast otherwise it would have winds on the surface of the planet that were over 200km/hr continuously.

In other words, if this was not so, it would be like trying to live on a planet where there were continually cyclonic climate conditions, which of course would make intelligent sentient life formation impossible.

So basically it has to be like a type of goldilocks planet, just perfect or right, so to speak, for intelligent sentient life to exist at all, otherwise you will get life formation, except it will be of the extremophile type of which there are many actual examples of here on planet earth.

Naturally, the basic organic and inorganic chemistry would have to be perfect as well on this planet, for intelliegent sentient life forms to evolve.

From the study of embryology we can deduce that a one cell organism is the first thing that evolves, and this is a complex feat in of itself! this takes an enormous amount of time and annual dice rolls, as there cannot be a creative god as such in this perpetual system.

Then eventually there are 2 cells formed, then 4, then 8, then 16, then 32, then 64, then 128, then 256 and so on and so forth, untill a fish type being evolves, then it goes through an amphibious stage, then a reptilean stage, then a mammilian stage, and then we have a hominoid stage, us human being types, ok Major Grimshaw.

At first these beings live very primitivley, but given enough time their brains eventually expand with an adequate protein intake amongst other nutritional necessities, which becomes available when they become smart enough to hunt and kill larger more less evolved animals and then these hominoid beings start to reproduce by marriage and then they form primitive societies as such.

They have families, clans, tribes, nations, they have kings and queens, feudalism, communism, socialism, capitalism, emperors, but nothing really works well for very long, nor does any system last for a long time, untill they eventually evolve the perfect system, which is of course social mutuality.

What i mean by this, is that if even one individual on this planet is not doing okay, then none are doing okay, because of the cause effect of interconnectedness, hence the urgent need for the concept of  mutuality to exist, so as to be able to form a complex ordered logical society and not a perpetually warring society.

Any other permutation or combination can never last the long term, this is an undisputed fact.

Eventually, under this system of perfection, the numbers of the humanoid beings starts to become too many, for the natural resources of this goldilocks planet to support them all.

Hence, under this eolutionary pressure, this society of beings becomes very technologically advanced, and eventually with their own planet in a stage of natural resource exhaustion or depletion, the are forced to boldly go to other potential goldilock planets in other galaxies, so as to commence this whole process all over again, except this time, they are doing it from a much more technologically sophisticated base, in that they are truly space fairing and have developed the know how with regards to converting energy into matter and matter into energy.

Thus they are able to conquer the boundaries of the very multiverse itself.

Major Grimshaw: Dr. Mark Mitchelson that is quite an incredible story when you tell it like that!

what may i ask happens next and how does the space alien hominoids, get to where they want to or need to get?!

Dr. Mark Mitchelson: Major Grimshaw, you have been a very good listener. so i have decided that I will tell you what the space aliens from another more ancient planet then our own do next, but we will have to continue our digression on another day at another interview.

However, I will say this for sure, which is that with the knowledge of my “proof of reality” and remember this is not a theory, but a scientific fact or “proof”.

that for the whole evolutionary process as outlined above to occur, there is absolutely no need for a creative god enity at all to exist, just a perpetual background system, which allows for an infinite number of dice rolls so to speak to occur and if the roll is a bad one, then there is no evolutionary change or progress as such.

If it is a good one and this is a relative thing, that depends on a number of environmental factors being present.

Then therefore, there is no need for any of us human beings as such, to actually worship any god or any other living entity for that matter.

As it is a complete waste of everybodies time and energy, which is what the chinese have actually worked out centuries ago on the planet earth.

So what I am informing you of is not actually a new concept in many ways actually, except if you are not Chinese!