Documentary on 9/11 Widows: Beyond Belief a Film by Beth Murphy

Beyond Belief, a documentary film by Beth Murphy is truly beyond belief.

This independent film documents the story of two 9/11 widows who decide to truly make a difference in the world and shows that something good can come from tragedy.

This is a must-see DVD. The contents are suitable for everyone. The film stirs the emotions and is sad, joyful, thought provoking, and much more.

Beyond Belief tells the story of Susan Retik and Patti Quigley, two moms living happily in Boston with their husbands and children, both expecting another child, when both of their husbands are killed in the World Trade Center collapse on 9/11/2001. Having never met before, they form a deep bond born of grief and common circumstances.

While many having suffered such terrible, horrific losses would become bitter, these unique, astounding mothers begin to look at the country where the terrorists who killed their spouses and so many others trained. Afghanistan, they learned, is home to many thousands of widows due to war and these women had nothing to do with the terrorism. They simply want to live their lives and raise their children. However, their culture does not look kindly on widows nor does it provide financial or emotional support as you will find common in the United States.

From Ground Zero to Boston

The two mothers featured in Beyond Belief realize the women in Afghanistan need their help. Being blessed with so much, they decided to raise money by biking from Ground Zero to Boston, a trip of 250 miles, in hope of raising thousands of dollars to somehow help the widows half way around the world.

The old adage of “give a man a fish and he’ll eat for a day; teach a man to fish and he’ll eat forever” is similar to the solution the Beyond Belief women chose to follow. By supplying the equipment necessary, the skills, and baby chicks, they were able to help 400 widows become small entrepreneurs who raised and sold chickens and eggs while using some of their production to better feed their own families. This enabled these Afghani widows, often living with large families including parents and in-laws in a single small room, to earn enough to improve their lives and send their children to school.

Beyond Belief doesn’t end there, however.

These two American women who have been through so much decide they should visit the women they are helping in Afghanistan. While planning their trip, one of their main C.A.R.E. International contacts in Afghanistan, a young woman working to help the poor, is kidnapped and held captive for months before her release. This really gives the Americans pause to think of what can happen to them in a war-torn foreign land which holds such unfamiliar and strict ideas about women and how they may appear and act in public. 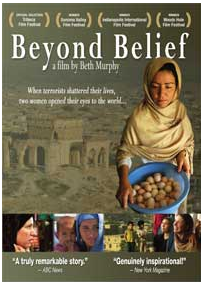 The cinematography in Beyond Belief is magical and the music is moving, including Five for Fighting’s Superman and the main score by Evren Celimli. The scenes of Afghanistan, photographed by Kevin Belli and Sean Flynn, tell a real story of what life in that land is like for those living in such complete abject poverty. The emotional spectrum ranges from tear-jerking to scenes that will make your heart soar.

I highly recommend Beyond Belief by Beth Murphy to anyone, especially those touched by any form of tragedy and the potential for transformation.

This film was an Official Selection for the Tribeca Film Festival. It is published by Principle Pictures. Don’t miss this highly acclaimed DVD. It is one you will watch more than once, learning a great deal about love and forgiveness with each viewing.

To learn more, visit > Beyond Belief Documentary by Beth Murphy