With an odd yet refreshing combination, Autumn Sky (Minstrel Hall) features fifteen songs characterized by both contemporary and traditional styles of music.

Award winning duo Blackmore’s Night is known for its renaissance folk flair, and this album doesn’t stray far from that path.

Night is a vocalist and songwriter whose lyrics are heavily influenced by both her and Blackmore’s appreciation for the renaissance period, as well as the myths and folk tales the duo encounter on their worldly travels.

They duo was formed in 1997 as a vehicle to bring to contemporary audiences the vibe and melodies of the renaissance period. Each album also features different musicians with unique contributions. Autumn Sky, which debuted at number one on the Billboard New Age chart, was composed and arranged by Blackmore. The album is dedicated to their daughter, Autumn Esmerelda. 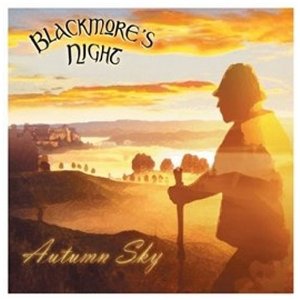 New age music fans already familiar with Blackmore’s Night will appreciate this latest release, as it follows their original idea of pairing music from the middle ages with a modern twist. Those who experience Autumn Sky as their first Blackmore’s Night album will definitely be intrigued by the duo’s originality.

There are several songs with an undeniable medieval feel to them. For example, “Highland” is the first track of the album, and immediately draws listeners in with it’s upbeat, determined energy. It’s a melody quite reminiscent of a medieval theme song. This is followed by “Vagabond (Make A Princess Out Of Me),” a reflective and melancholic tune that lets listeners’ minds take them to ancient castles and tall grassy fields.

In contrast to these medieval-feeling songs, “Celluloid Heros” features strong contemporary vibes. It seems a bit mismatched due to its lyrics (a “Hollywood” theme). My favorite song of the album, “Believe in Me,” is one that reflects Night’s beautiful and powerful voice in this longing, truthful, and loving melody.

Autumn Sky is an album new age music lovers must add to their collections. With both ancient and modern influences, the album features a variety of instruments, such as guitar, mandolin, tambourine, violin, flutes, horns, and more.