The Shack: Where Tragedy Confronts Eternity by William Paul Young

The Shack: Where Tragedy Confronts Eternity is published by Windblown media in conjunction with Hachette Book Group USA, 2007.

The author William Paul Young was born the eldest son of four siblings in Grande Prarie, Alberta Canada. He was born on May 11th, 1955 in Canada.

He spent his first ten years living with his missionary parents  in West Papua, which is in the highlands of Netherlands with a technological stone age tribal people known as the Dani. Now Young lives in Gresham, Oregon with his family.

He was the first white child and outsider to ever learn the native language of the Dani, and became the first to open a door to access the culture elements of their community.

When Young decided to write The Shack, it was really just for his six children, with no intention for publication. However, now that the book has been widely read by others what lies between the lines of this best-selling novel? Young reveals you will gain deeper insight into his life through the characters in the book.

‘The Shack – Where Tragedy Confronts Eternity’ now currently holds the prestigious title of The # 1 New York Times Bestseller. That, coupled with the printed reminder on the front cover that there are over three million copies in print, would suggest that this book has something to say, and that it has the attention of a lot of people. We expect that this is going to be good – both in a literary fashion as well as in its purpose.

The blurb explains that the youngest daughter of the main character has been abducted and possibly murdered at a remote shack in the wilderness. After four years of being impacted by this tragedy, everything about his life, including his relationship with his God, changes.

An invitation is extended to him to spend a weekend at this very shack … apparently by God him/her/its self. What happens during his time there is the most critical part of this story and the reason why I imagine there would be much debate about its messages. Being at the shack is the point in the novel where you will either love or dislike this book. It is where you have an opportunity to reassess your thoughts and feelings about your own relationships with religion / God.

Do our Relationships and Belief Systems Shape Our Lives?

This book’s focus is on how we relate to others and why. The way Mack handles this tragedy determines the type of relationships and belief systems he has and, this is why God wishes to be with him. For me, uncovering the root of his despair and guilt in ‘The Shack’ acted much like a mirror where our relationship with ourselves is exposed. Everything we tell ourselves is true and all we believe in shapes our interactions with others – our relationships are founded on these subjective expectations we have of life and others.

Mack (our main character) is completely at odds with his faith after the tragedy and cannot reconcile his or his God’s, role in it. As a parent, I immediately identified with his sense of loss. Panic, fear and guilt, as shared by Mack, are very tangible for those of us who are parent readers. Regardless of one’s faith, the ‘why’ question is usually foremost. When these discussions occurred, I found a level of annoyance set in. Receiving the ‘bigger picture’ was not what I expected and not very satisfying because the esoteric does struggle in the face of every day reality.

Questioning Your Relationship with God

The point of Mack’s time with God is to really comprehend his relationship with his God. What is essential, however, both for the character and us, is that Mack is brought to question what he has believed his relationship with God is all about. Are laws written by men within a church exactly what God meant? What does God tell all of us through this time with Mack about how far we may have strayed from our true relationship with God? What path are we then offered to return if we choose? Like Mack, we are able to question, process and decide all that this God is suggesting and, in many ways, trying to de-programme in those of us who have beliefs imprinted within us because of a religious organization. 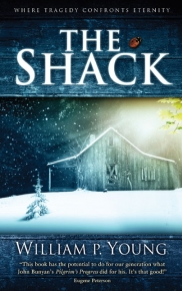 I found some of the merry-go-round questioning to be without answers – not so that the reader or our protagonist can conclude on our own – but simply, evasive. Many ‘responses’ from God were judgmental, cryptic and superior with a dash of reverse psychology, too. I struggled with the whole walking on water episodes and the calmness Mack displays when a truly disturbing event occurs. As a parent, I doubted the validity of his reactions.

Despite those elements that are so intrinsic to the whole religious mysteries as they are also described here, ‘The Shack’ offers readers an opportunity to question, openly question, God, organized religion and their relationships and belief systems within it. This is a rare choice in a novel that is easy to read and yet, quietly profound.