Read a review of “Failed God: Fractured Myth in a Fragile World” by anthropologist, John A. Rush and published by Frog Books.

Reader beware, you will soon realize Rush’s book is not for everyone, except those curious enough to connect some of the most overlooked mysterious surrounding religion from the space of seeing with new eyes.

While reading Curtis’ review you may feel like you just visited the underworld, only to learn that monotheism’s religious roots may have really began from mind-altering trips to the innerworld.

If Salman Rushdie got a fatwah of death issued against him for writing a satiric novel, the Satanic Verses, what can possibly be in store for John Rush who has written a scathing scholarly treatise exposing, in its own words, the hypocrisy and malignant intent of modern monotheism?

Can he expect a fatwah at least, from some Ayatollah, an Encyclical from the Pope (who used to head the modern day version of the Inquisition), or surely a late night raid by Mossad (the Israeli CIA)?

Rush distributes his outrage pretty evenly between the Big Three; Judaism, Christianity and Islam. Curiously he does reserve a bit of faint praise for the scant “teachings” of Christ such as the Sermon On the Mount, but not enough to rescue Christianity from his wrath.

The Sacred Mushroom and the Cross

“The Bible and Qur’an cannot be understood . . . without reference to mind altering substances” writes Rush. This is a premise which exploded upon the scene with the publication of John Allegro’s 1970 book The Sacred Mushroom and the Cross which posited that the Dead Sea Scrolls revealed the Old and New Testaments to be coded stories of the particulars of an ancient tradition of fertility rites centered on rituals using hallucinogenic mushrooms.

Allegro, a linguistic scholar specializing in Semitic and Proto-Semitic languages, plus Aramaic, classical Greek and what little was known of Sumerian at the time, had been invited to join the academic team assembled to study the Dead Sea Scrolls. He was summarily thrown off the team, his academic career ruined and a string of best-selling books ensued. 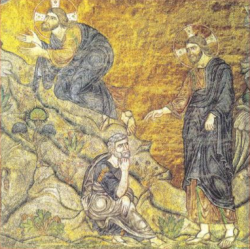 The cover illustration on Failed God is a photo taken by Rush of a portion of an arch in St. Mark’s Basilica in Venice, Italy.

It depicts the risen Jesus, hand wounds and all, holding a mushroom and surrounded by more mushrooms growing. A follow-up book contains hundreds of examples of murals, artifacts and stained glass depicting mushrooms and other psychedelic plants as recurring motifs.

These cannot be casual inclusions considering the very costly artwork had to commissioned and approved by the highest church officials, all the way up to the Pope in some cases.

Rush weighs into the fray formidably armed with breathtaking scholarship in all things Biblical and in the Qur’an, which Islamists consider the third and final revelation of God after the Old and New Testaments. All are considered by their proponents as the Word of God. However, taken literally as ancient texts written by bronze age desert scribes and poets, we must conclude that “There are only two ways to go: Either Abraham, Isaac, Moses, Jesus, Paul and Muhammad were psychotic, or they were on drugs.”

“Without mind-altering substances, the supernatural evaporates into cultural psychosis.” 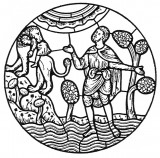 The indictment Rush makes is that these drug induced revelations were hijacked for political purposes and their source, mushrooms, cannabis, etc., hidden and demonized lest the masses become as empowered as the ancient seers. “The Old Testament was not written for the masses but represents a mythical charter that justified land ownership and special privileges.” Far from being texts that provide moral clarity, the stories and admonitions grant absolution for the most hideous crimes against humanity, war crimes, social pathologies, slavery, adultery, incest . . . as long as they are done in “good faith.”

God as Other Versus God is Within

Buddhism and Hinduism evolved in a different societal climate in large part because India is so difficult to invade, whereas the Middle East, even in modern times has been swept by waves of invasion and conquest.

The invincible Genghis Khan gave South Asia a wide berth and Alexander the Great’s army was broken there. “These spiritual traditions turned inward with the realization that the individual is God, and the energy that informs all, Atman, is not separate from Its creation . . .”

In the Middle East, “God becomes the other, existing outside the individual, the one who conquers and then rules with an iron fist.”

We can see how New Age Christianity has borrowed much from Eastern thought.

The Gnostics, contemporaries of Jesus and the Essenes, rooted in Judaism, but tracing their metaphysical lineage to the mysticism of the Egyptians claimed, “The trouble with Yahweh is that he thinks he’s God.”

They also considered the doctrine of the divinity of Jesus to be blasphemous. “In my opinion, the saga presented in the Old Testament is by and large about a shift in thinking that corresponds with the development of urban centers, diverse tribes entering that political geography, but at the same time attempting to maintain tribal identity.”

My God is bigger than your god, so we’ll take your land and your virgins.

“Islam, as it is known after 750 CE, has never been a religion of peace. Islam can only live in peace with its neighbors if it has no political power; this holds true as well for Judaism and Christianity.”

“There is absolutely no evidence that suggests that Muhammad had any notion of creating a religion. Just as in the case of Jesus, he therefore cannot be the founder of Islam, but a reference point only.” How’s that for a pair of fact based statements that will keep Rush off the network discussion panels and maybe shot on the streets of Amsterdam like blasphemer and filmmaker Van Goghe. 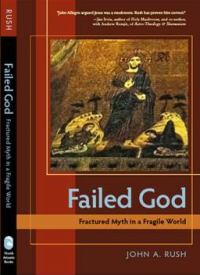 “People live in a fractured world with one foot standing on a rational platform of science and the other in the irrational arena . . . of supernatural beings who talk to humans.” Rush finds no fault with the use of psycho-active plants to induce altered, even religious states. His scorn is aimed at those who manipulate the revelations of drugged out ancient shaman/priests (Muhammad was most likely a military general and shaman) to build armies and empires, indeed to build western civilization, and to bring the entire world to the brink of annihilation based on willful duplicity and the modern interpretations of greedy charlatans like Jerry Falwell, Osama bin Laden and the Israeli lobby.

“This book is about myth, how the Bible and Qur’an were constructed, and the use of very powerful mind-altering substances in the building of the myths . . .”

This book is also about truth, unalloyed and impassioned by a deeper morality which “stems from social necessity, not religious observance,” and from “simple human decency.”

It’s also a good read. The scholarship is impeccable and the outrage well placed.